We're going to look at the differences between a regular old card meter and the Metro Prepaid sub meter and let's see what are the pros and cons of using them and which meter would you choose as the landlord. 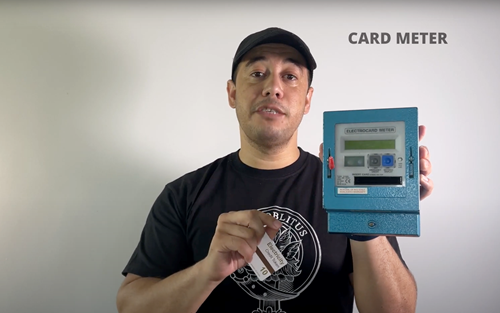 The first meter we're going to look at is going to be the Electrocard Meter. These meters have been around for some time now and they come with a pack of cards that the landlord has to sell to the tenants, so that means the landlord has to be on the property or close to the property or maybe instruct somebody to actually be on the property to sell these cards to the tenant. The tenant can buy these cards for a tenner or a fiver and insert it into the meter and that's how the meter gets stocked up with credit.

It's inconvenient for the landlord because the landlord can't go on a holiday without getting somebody to sell these cards to the tenants. Another problem with these meters is that a tenant can buy a master card online and not buy from the landlord and they'll bypass the landlord completely. This master card never runs out of credit, so even if they pay a tenner for it, they'll never run out of credit but the landlord still has to pay his main utility bill. So that's one of the problems with these types of meters, they are affordable and they are available at any electrical wholesaler. 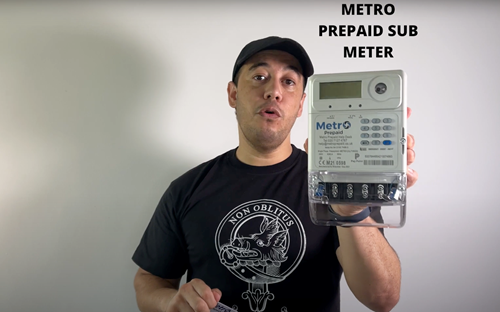 The second meter is my favorite meter and this is called a Metro Prepaid Sub Meter and it comes with its own electricity meter card and with this card the tenant can now buy their own electricity from any PayPoint outlet ( Sainsbury's, Co-op, Tesco etc.) or even online and they'll get a 20 digit token (Metro Code) that they'll have to key into the meter and that will top-up their meter with credit.

The landlord doesn't need to sell cards anymore and is taken out of the equation. The landlord would sit back and every time a tenant buys electricity Metro Prepaid collects that money and they'll reimburse the landlord at the end of the month so that he can pay his main utility bill.

The meter also comes with something called a temper mode. If a tenant tries to temper with these meters and take off the cover the meter goes into a temper mode -  where there will be electricity on the meter but not supplied out to your plugs, lights or appliances. In other words, the tenant won't have any electricity that they can use once the cover is taken off, even if they put the cover back on - they'll still have no electricity. In that case the landlord has to call Metro Prepaid on the call center number and ask for a temper code. Once the landlord receives the temper code, they can then key the temper code in and it will unlock the meter again.

It's a safety feature with these electric sub meters. Another way that Metro or the landlord can pick up if a meter was bypassed is through the report Metro sends every month to the landlord. The landlord then can see how much electricity the tenant has used and what Metro is going to pay him back at the end of the month.

The Metro Prepaid sub meters are available from any electrical wholesaler and it costs around about 40 pounds per meter.